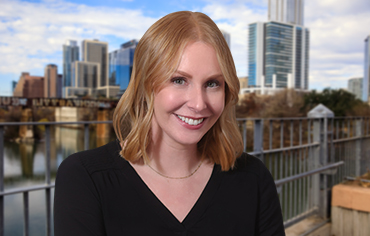 Since 2011, Corrine has represented individuals and families as they traverse the complicated and emotional landscape of real estate. She prides herself on creating a positive, thorough, and educated decision-making process for the clients she works with. As a Realtor, Corrine has honed her skills in sales strategy, negotiations, technology integration, and interpersonal relationships. She began her real estate career in the hot, competitive San Francisco Bay Area market. Since moving to Austin in 2016, Corrine has become well versed in what it takes to win in our local market and loves life here in Texas! (Read More)

Corrine has a BS in Communications and a Minor in Digital Audiences which has been useful in helping her further her marketing skills and utilize technology to better serve her clients and real estate community. Corrine has served on the Austin Board of Realtors Young Professional Network and enjoys working with her peers. She has a very large and playful Silver Lab and enjoys mingling with her fellow dog people at local parks. She also has a cat, who's the perfect companion when she'd rather stay in and Netflix binge. Despite her fair complexion and red hair, She loves being outside and in the pool (with sunscreen, of course), enjoys the local live music scene, and comedy shows. She can’t wait to get to know you and learn what’s important to you in your life, in your home, and what you love about Austin!

Corrine Elgin helped me with my first home purchase at probably one of the worst times to be a buyer in Austin. She was fantastic!! She first set up a call to go over my wants and needs and explain next steps. Then started pulling searches for me. She was very attentive and made notes and actioned on any listings I liked in the portal we worked out of. When I finally found my house, again, she was there every step of the way. Any questions I had, she answered them in a timely manner and even made some great recommendations. I also really appreciated her coming to my closing for support. I want to *reiterate* I had no idea what I was doing throughout this entire process and Corrine did an amazing job guiding me. In summary, Corrine and I know my situation was a bit unique and we both won’t forget it anytime soon 😂 but I truly appreciate all her hard work and would recommend her to anyone looking to invest in property!

Really glad that we chose Corrine as our realtor for our investment property purchase. She is a great realtor and has broad knowledge on all aspects of real estate process. Right from the first meeting where she understood our requirements clearly and then she pursued all the way till we get the right property at the right price. As remote investor, we needed someone on the ground who knows the locality very well and she was a perfect fit. Around 2+ months she patiently visited multiple open houses, took pictures, placed the right offer and perfectly negotiated with the seller on the needed issues. Thorough out the process she almost updated us on daily basis. We are very happy at the end. She is always approachable for any question & clarifications even after the deal is done. Thank a lot Corrine :).

This is my second time now using Corrine Elgin (a realtor with this group), once for a lease, and once to purchase a brand new home! Corrine is kind, smart, listens to her clients wants, and does all of it without any judgement. As a first time home buyer, she made it easy to navigate and answered even questions which shouldn’t really fall to a realtor. She was an advocate with our builder and worked with us for MONTHS to make sure we were happy! We got so close my fiance even invited her when he proposed to me in the house we just bought! I recommend her to EVERYONE, you won’t be disappointed.

Corrine was amazing in this whole buying process. We came in as new home buyers and she really walked us through step by step and made sure we weren’t screwed over. She seemed to actually care about us and the outcome of the whole process. 10/10 would recommend. She is so sweet and thoughtful and truly cares about her clients. If you get the chance, choose Corrine to be your realtor. She does the work and knows the ins and outs of the realty landscape so you will get the best outcome you could imagine with the house you are looking for!!!!!!

If you’re looking for a realtor you have found the best one!!! I worked with a few different ones during the process of finding the next place to call home and Corrine’s service was superior. She went above and beyond to make sure we had everything we wanted. She was there to answer any questions or concerns we had even after our move in. I highly recommend for anything you may need a realtor for!!

Corrine was a great help to our family as we were anxiously trying to find a home after repatriating from abroad. She has a super attitude and made it fun and enjoyable. I felt like she was quickly understanding what particulars we hoped for in a house and tailored the search.

Best part was that she was quick to respond to our messages and questions throughout the process.

Corrine is a top class realtor. She is smart, responsive and is focused on getting the most value for her clients. She spent good time to understand my investment property requirements which was crucial for us to be on the same page on which properties to pursue and which ones to pass. Throughout the negotiation, she represented me and my needs. With her help, I was successful in buying a Class A property in a great location in Austin suburbs. However she didn’t stop there – she even got me my first tenant through her network! I wasn’t expecting that.

Thank you Corrine 🙂 I highly recommend Corrine for your real estate needs.

Corrine is an amazing person! She knew from the beginning that we were in a time crunch to find a rental property. We saw 8 properties on the first day and had several more lined up just in case. She was always quick to respond with questions and concerns and was on the ball when our rental wasn’t ready on time. She is a kind and genuine person and will have your best interest at heart.

After renting in Austin for 9 years, Corrine turned me into an Austin homeowner! This wasn’t easy, as I picked the most challenging year in recent history to be a homebuyer. Also given the parameters that I didn’t want to move to the outskirts of town to be far removed from the hustle and bustle of the city.

Corrine spent many hours each day gathering houses to consider, creating a list to visit, and driving me to probably close to 30 houses over roughly a month. We made offers on five houses that I recall, as Corrine guided me through that challenging process. And while I was approaching the point of giving up, Corrine refused to do the same — so thankful, as it resulted in the offer on the 5th house being accepted! Every step of the way she made me feel confident enough to keep battling and it paid off. I couldn’t have done it without her.

Corrine is an expert in her field. I wouldn’t hesitate in a heart beat to recommend her to my friends and family. She quickly help identify our new home in a brief 45 days time crunch as well as help with all the logistics and negotiations with the seller, banks and title company. We were fortunate and blessed to have Corrine as our realtor.

Corrine was amazing in helping identify the perfect investment property in the Austin area. As a remote investor, you need someone that’s hands-on and has in-depth knowledge of the neighborhoods and willing to go that extra mile to do the due diligence. And Corrine had all of these traits and made the process extremely seamless. She was always a step ahead and I’d highly recommend her for anyone looking to purchase in the Austin and neighboring areas!