What Happens to Austin Real Estate in a Downturn?

A lot has changed in Austin real estate over the past few months. It’s now very clear that the pandemic boom is over and it’s a real possibility that we’re heading into a downturn. While lots of buyers welcome the additional inventory and the breathing room this provides, these changes have understandably made many sellers (and many buyers) nervous about the market. This begs the question, “What happens to Austin real estate in a downturn?”

~~~ Get Market Updates w/ SOLD info for Your Neighborhood Here ~~~

The last downturn in Austin real estate started in 2008 with the Great Recession. It’s important to remember just how deep and long this recession was. The recession lasted almost 18 months and it took the Austin market almost 4 years to recover. This is much longer than most recessions and most real estate downturns.

That said, how was Austin real estate affected in 2008? 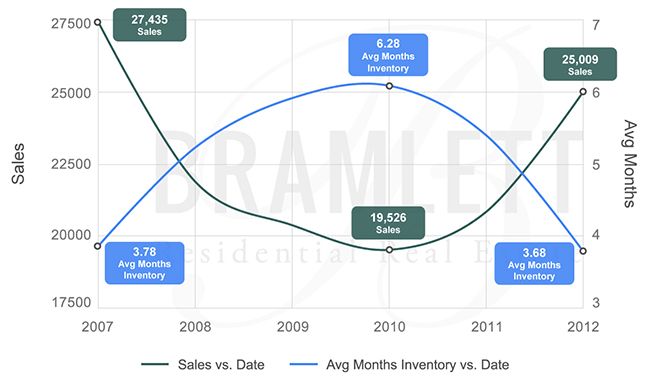 When buyer demand declines (which is the direct cause of a slowdown) the most obvious effect is a reduction in sales. The total number of sales declined by ~20% from 2007 to 2008 and bottomed out in 2010 with a ~29% decline. (Again, bear in mind that this downturn was loooong.) The declining sales directly contributed to an increase in Months of Inventory. Pre-recession, the Average MOI was 3.8 (a balanced or slight seller’s market) and it pushed north of 6 Months of Inventory in 2009 and 2010, which is firmly a buyer’s market.

All of this additional inventory and decline in sales caused a big price drop, right? Actually, no. 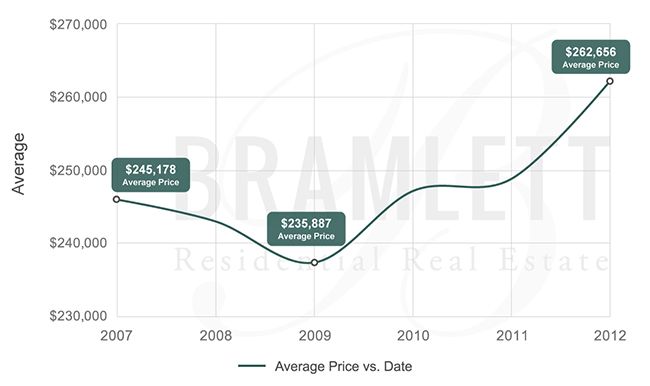 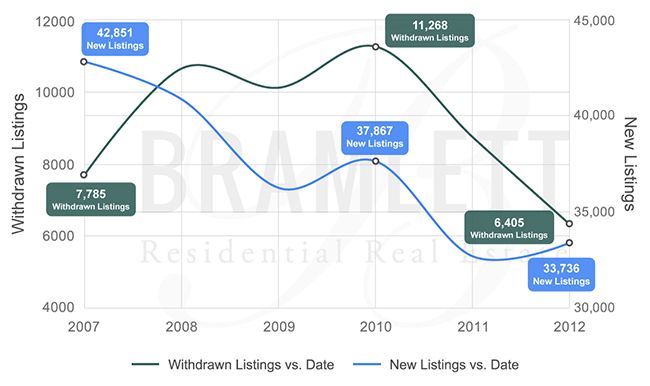 It’s important to remember that real estate is primarily a need, not an investment. When home sellers can’t get what they think is a fair price, many simply don’t sell. The number of withdrawn listings increased by roughly 40% during the downturn and new listings decreased by 10-20% (depending on the year.) A massive decline in new builds contributed to the persistent decline in new construction.

I remember prices getting hammered. What gives?
These are high level-level, 10,000 foot view numbers. The Average Sold Price didn’t decline much on an annual basis / macro level. At a micro level, there were some sellers who did really well (usually accidentally) and some buyers who didn’t do that well (also usually accidental.) 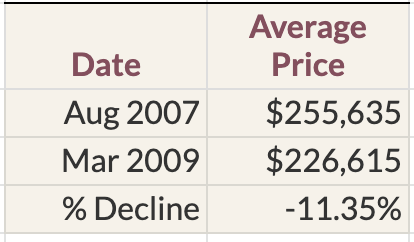 If we cherry pick the best month in 2007 against the worst month in 2009, we see an -11.35% decline. This is more in line with how people usually think and remember these events. People really hate missing out and will kick themselves for not having predicted the future. Most sellers will remember the most extreme month they could have sold against the current reality. (Statistically, this isn’t that bad, but it’s still not much fun.)

Will all sub-markets & sellers behave the same?
Sub-markets will all react differently. Builders have zero utility for homes they’re delivering, so they won’t sit on inventory. They’ll systematically reduce price and offer incentives until they’ve sold everything. They will continue to deliver existing inventory for 12 months after they decide to slow down. The luxury market is usually affected more deeply because luxury buyers are affected by the stock market and mortgage rates. These buyers will generally behave more conservatively.

Will this downturn be identical to 2008?
Almost certainly not. The 2008 downturn was caused by bad real estate lending, which took years to work out and which directly affected the real estate market. This downturn is caused by inflation, which is causing rates to rise. The time it will take to solve inflation will be different than it took to solve the toxic lending problem (and it will hopefully be faster.) Whenever interest rates stabilize and buyers consider them “the new normal”, we can expect the market to pick back up.

It’s important to remember just how lucky we are to be in Austin, TX. In the midst of relatively consistent bad national economic news, we see fantastic growth for our local economy. During the great recession, Austin was “last in, first out” and we do expect that to be the same in this downturn.

As always, real estate is hyperlocal, so everyone’s situation will be unique. If we can help you with strategize yours, please don’t hesitate to reach out.

Eric Bramlett is the broker and owner of Bramlett Residential, a mid-sized brokerage in Austin, Texas. Eric is a 19 year veteran in the Austin real estate market and specializes in building systems and technology. Bramlett agents pride themselves on their exceptionally high standards for client service and both industry and market competency. Eric lives in central Austin with his wife and son. In his spare time, he enjoys cycling, climbing, and traveling to be in the mountains.

Simon was a great help during the hunt for my new home. He was very attentive, helped me identify things to avoid in each house and gave his honest opinions. I definitely felt like Simon Vand was out to help me find something I would be happy in rather than just getting me into any home and then moving on.

My husband and I bought our first house with Kasey Gilliam 3 years ago and just sold that house with Kasey this month! Both experiences were excellent. We were nervous about selling, since we bought new and didn’t know what the procedure for selling would entail. Kasey walked us through the process and explained everything to us. She gave great advice and helped us to get the best offer possible. We are really pleased with both our buying and selling experience with Kasey. She answered all the questions we didn’t know we even had! Kasey now has a team behind her and everyone we worked with was excellent.

Alex Ellis was excellent. He listened to what our priorities were and found us a great fit in a very short window of time – 3 days to be exact. We were moving from North Dakota to Texas so it wasn’t the normal home buying experience. He was flexible with his time and these 3 days were Memorial Day weekend! He has great communication skills and walked us through the entire process. We would highly highly recommend Alex for helping you find your next home.

Erin Szczerba is a dream of a realtor. Not only is she punctual, organized, and easily accessible to her clients, but she listens carefully to feedback and intuits which properties have the most potential to fulfill your unique needs and wishes. I worked with Erin for several months from Atlanta before I was actually in the Austin area to view homes in person. By that point, she’d introduced me to such a wide range of possibilities online that it was easy to make a quick decision on a house that fit my budget and wish list. Along with all this, Erin is simply a delight to spend time with so the home touring process is fun. She made the closing easy and provided helpful contacts in the area for insurance, etc. Communication between Erin and the seller’s realtor was punctual and efficient.

We couldn’t have been happier with Bramlett Residential. They did a wonderful job selling our house in Austin for over asking in less than a week! They connected us with their team who walked us through everything we needed to do to get our house on the market. They were time efficient and truly made the process of selling a home stress-free! You couldn’t ask for anything more.

I was very grateful to Morgan that he did the research needed to properly price the condo at the price I needed. He was the fifth agent I spoke to, and the first to actually consider the specifics to the location and history.

Best realtor ever. I had the pleasure of working with Kasey and her assistant Kim. They were both personable and knowledgeable about the Texas housing market regarding new builds versus existing structure and the bidding process. They stood by you every step of they way and there was never an inconvenient time to respond,or take action on any question. Never have I felt so confident in buying a home outside of my state as I did with Kasey. She is the best. She guided me and provided her expertise every step of the way.

Tara McGuire’s skilled team helped us navigate the often-complex logistics of prepping, listing and selling our home while moving cross-country to another state, and we couldn’t be happier: they were wonderful to work with, conscientious and professional from start to finish, with great insights about staging and prepping the house for sale. She handled the sale negotiations smoothly and found us a great buyer. And best of all, our house sold for more than the asking price with multiple offers, and a quick close! I highly recommend Tara and her team of professionals to anyone looking to sell or buy a home.

Will and his team did a wonderful job selling our house in Austin. They provided us with a designer and photographer in order to get our house ready for market. The team is very organized and walked us through everything we needed to do to get our house on the market. They were time efficient and we sold our house over asking In four days! They truly made the process of selling a home stress-free! Couldn’t ask for anything more.

Ashley Vavasour is very professional and helpful!! She was always there to answer questions and on top of making sure our new construction home build was done correctly! I highly recommend her if you are looking to find new roots!

I recently helped my son with a home purchase in Austin and was very impressed with Danny De Luna of Bramlett Residential Real Estate and Danny’s customer service and knowledge of the entire process. I live in another state but Danny kept me in the loop every step of the way and ultimately helped my son to find and buy a perfect home for himself in Austin in a very tough market. Danny was not high pressure and was very kind, patient and responsive to our specific needs which meant a lot to me. Danny is a pro!

Once more, I requested Vicki’s assistance in selling my home. With an initial walkthrough, she provided great guidance on how to prepare for the sale and furthermore, she provided a comprehensive assessment for potential buyers and an easy means to compare a multiple-offer situation. Her insight on the market was helpful to set ourselves up for this situation and end up with a great offer to walk away with!