Why is the Austin Real Estate Market Booming?

Austin has been a boom town for decades due to our robust job growth. As long as we can remember, Austin has been listed as one of the "Fastest Growing Cities in the US" (and is often listed as #1.) Our high quality of life, relatively low cost of living, educated job force, and "weirdness" all contribute to this. However, Post-COVID has seen an unprecedented boom. Why?

Tesla, Apple, Google, Facebook, Indeed, & VRBO are all companies who have increased their presence in Austin dramatically in the recent past. These are also all highly recognizable companies. You probably haven't heard of QSAM Biosciences, Eleiko, Alpha Paw, Sentry Kiosk, Ametrine, 8VC, Truelytics, or Digital Realty Trust. These are only a few of the "other" major companies who have relocated their HQ to Austin very recently. https://www.bizjournals.com/austin/news/2021/02/08/these-headquarters-have-moved-to-austin-in-2021.html

Even though we're rapidly appreciating, Austin is still a relative bargain. It makes sense that we would be considerably cheaper than The Bay Area, Manhattan, or Seattle. The fact that we're considerably less expensive than Denver or Portland indicates that we have room to grow. More details are available here. 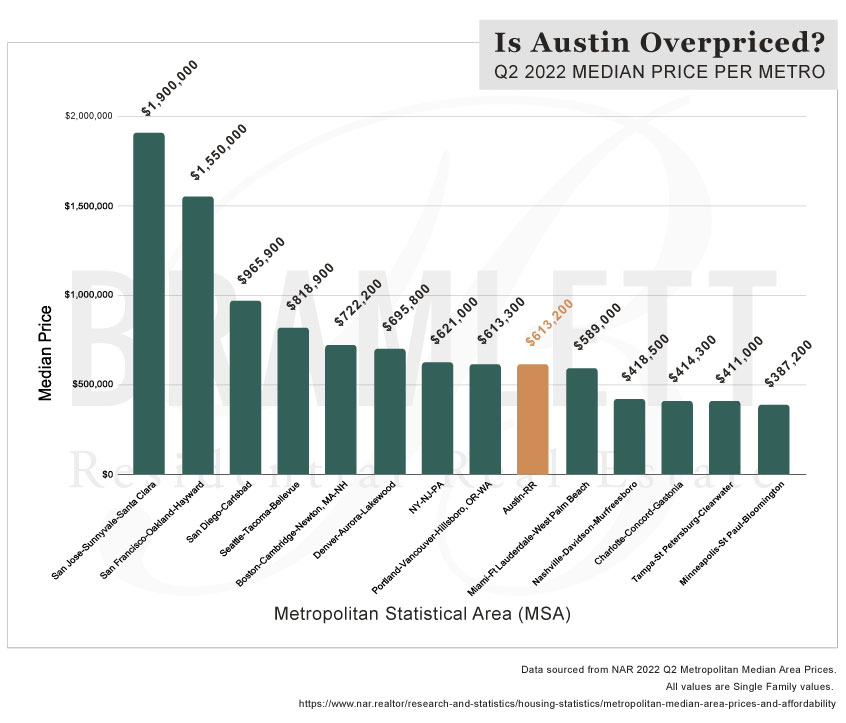 Austin was already in a housing shortage before this recent boom. The broader market has consistently been in the <3 Months of Inventory range for 5+ years, which is considered a seller's market. We already needed to play catch-up prior to the boom, and the inventory problem has only worsened after the boom.

Austin has a comparatively high tax rate, but Texas has no state income tax. Many tech-heavy states (like California) have very high state income tax rates. When you compare the overall tax burden between Austin and these states, Austin wins by a decent margin.

Due to COVID, many workers (and almost all tech workers) now work remotely, from home. Many tech companies have announced that this change will be indefinite and are allowing their employees to live anywhere in the US (or world) that they would like. These remote workers now place a high priority on physical space and are looking at less expensive markets where they can buy a larger home and still maintain a high quality of life. Austin tops many of their lists as an option. This demand is new and unexpected, and it was caused 100% by the changing dynamics caused by COVID.

Is Austin in a Bubble?

We don't think so. True bubbles are relatively rare in real estate markets. Beyond that, the buyers in Austin are largely owner-occupants with 20% or more down payment in their homes. These owners are unlikely to dump a property if there is a temporary flattening (or drop) in values. This boom is very different than 2007 (during which Austin fared incredibly well) and unlike any of the true bubble markets in Las Vegas, Phoenix, etc that did exist before the 2008 crash. More on this is available here. 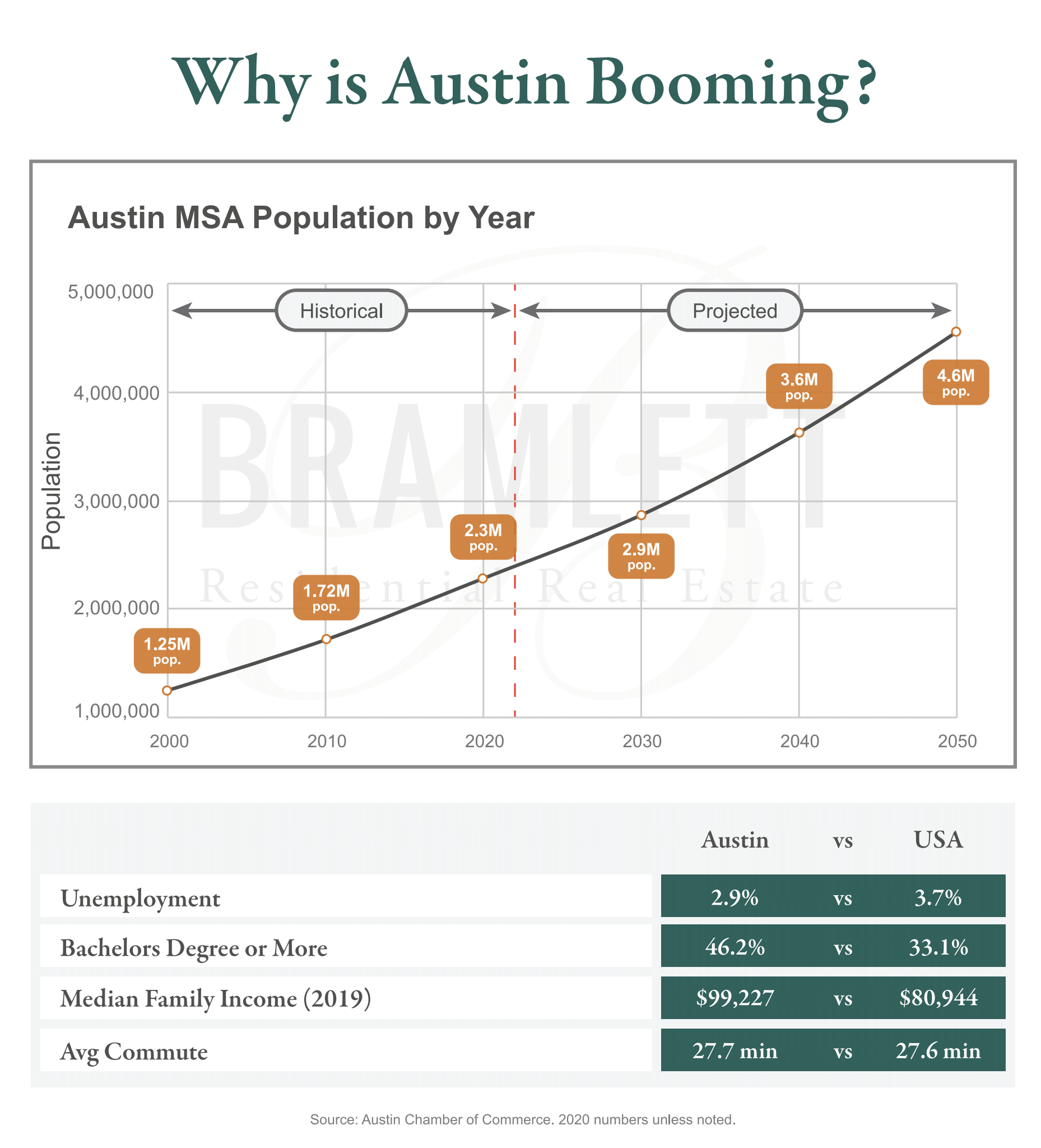 Ready To Get Started?

Bramlett Residential, and more importantly Joe Gage were amazing at helping my wife and I buy our very first home. Bramlett & Joe made the whole process stress free, and really helped expedite the process for us. We had no idea we would find exactly what we were looking for so quickly! Joe was very knowledgable on numerous things such as market strategy, what things to look for while touring homes, and he quickly understood exactly what type of home my wife and I were looking for. He was also in constant communication with us throughout the whole process which helped us feel very comfortable in a situation that could have been stressful. I will confidently recommend Bramlett & Joe Gage to anyone in the Austin area going forward!

We worked with Crystal Hirst and she did an amazing job. She went above and beyond to make sure that we found the right property for us. Our search initially was all over the place and we didn’t even know what kind of property we wanted. Nonetheless, Crystal was incredibly helpful and patient while working with us to find our home. Crystal would point out all the pros and cons for any place that we would consider and we felt we could trust her. As first-time homebuyers we felt this was important because we did not know what red flags to look for in a property. Additionally, she was communicative and extremely responsive throughout the entire process. We were very satisfied with Crystal and would recommend her to anyone with no reservations whatsoever.

It was a pleasure working with Shaun, he is a very pro-active person and move things fast, communication was assertive and clear. As a first time buyer I could not have been in better hands and would recommend him a hundred percent.

Jan was wonderful to work with!  Bringing a toddler while house-hunting can be a nightmare, but Jan made it fun for all of us.  It felt more like exploring the area with family.  We didn’t feel any rush or pressure to buy, and we knew Jan had our best interests in mind.  She was always friendly, but when it came time to negotiate, she fought hard to get us the best deal.  I would highly recommend working with Jan whether you are buying or selling.  If we ever move, we’ll definitely be asking for Jan again.

Jan is fantastic!  We moved from out of town, and she was great about showing us around and researching schools and home-builders for us so we could make the right choice.  Jan showed us both rentals and new builds in a rainy, single-day house-hunting trip, and, despite the weather, her enthusiasm never wavered.  We have been in Leander for two years now, and Jan still keeps in touch and serves as a source for local info!  If we ever move again, she’ll be our first call!

Because we were first-time home-buyers, Jan was the wind beneath our wings while we worked with her.  She listened to what we wanted and made sure that we weren’t getting into something that would damage us in the long run.  She was passionate, caring, and very knowledgeable.  We were from out of town, and she taught us a lot about the area and gave us some insider knowledge that helped lead us to a great home.  She gave us advice for the future when we might become serious about homes, and she prepared us not just for purchasing our home but also for potentially reselling it years down the line.  Working with Jan was easy and enjoyable; she was on our side from day one.  She went above and beyond my wildest expectations and really raised the bar for realtors in my eyes.

Jan Daum is a realtor with panache!!!  When you sign up with her to sell your house, you can rest assured she will get it done fast, at the best possible price, and with all the tools in her toolbox put to use.  I’d no sooner signed on the dotted line than Jan showed up with a stager and a photographer.  My home went online with a very classy display and sold over asking in less than a week, and with multiple offers!  Jan did not even get a chance to hold the planned open house.  Jan was with me every step of the way and kept in touch constantly.  I would recommend Jan Daum as a realtor for any property and at any price point.  You will not be disappointed with the service or the results.

We had the pleasure of working with Elken Miller and we loved our experience working with her. She is knowledgeable in her filed and will give you her honest opinion and she held our hand the entire process and we bought in 2021 which was a very competitive market at the time and she was absolutely awesome in helping us secure the house we wanted!
She is warm and always returns your calls and is on top of things you may not have even thought of. I highly recommend Elken Miller!

I started working with Elken summer of 2020. I had just moved to Austin and had no idea where to start looking given my tight budget and all the bidding wars happening. Elken helped me navigate that process every step of the way with ease. She was able to find me a new built in Elgin that fit perfectly with my needs. She is incredibly knowledgeable in the housing market, has great business acumen and is very resourceful. Elken also assisted me in negotiating with builder, lenders, and third parties (e.g. alternative “buy before you sell” type of lender, etc.) and did not stop until I got a great deal. In addition, she is thorough and proactive ensuring that all your questions are answered and that your expectations are met. Lastly, she is friendly and kind and never ceased to go above and beyond for me during my home buying journey. I will absolutely work with Elken again whenever I am ready to find a new place.

We enjoyed working with Elken at Bramlett Residential Real Estate for buying our first home. She’s detail oriented, help us address concerns, and always willing to answer questions that we have along the way. Highly recommended and we would definitely work with Elken again when an opportunity comes in the future.

As first time home buyers and new to the area, Elken Miller was a true blessing. Elken went above and beyond to search for a perfect home for our growing family, before the baby’s arrival. She listened to our needs, wants and stayed within our budget. She walked us through each step and treated us like family. We are now first time home buyers of a brand new build, in a beautiful area with a large backyard where we can create memories with our baby! Elken is professional, knowledgeable, caring and will not give up on what you’re searching for until she finds it. She’s the best and we truly thank her for everything.